3/1/17
Congratulations to Kai Quizon who was nominated as one of OC Register's Artists of the Year! 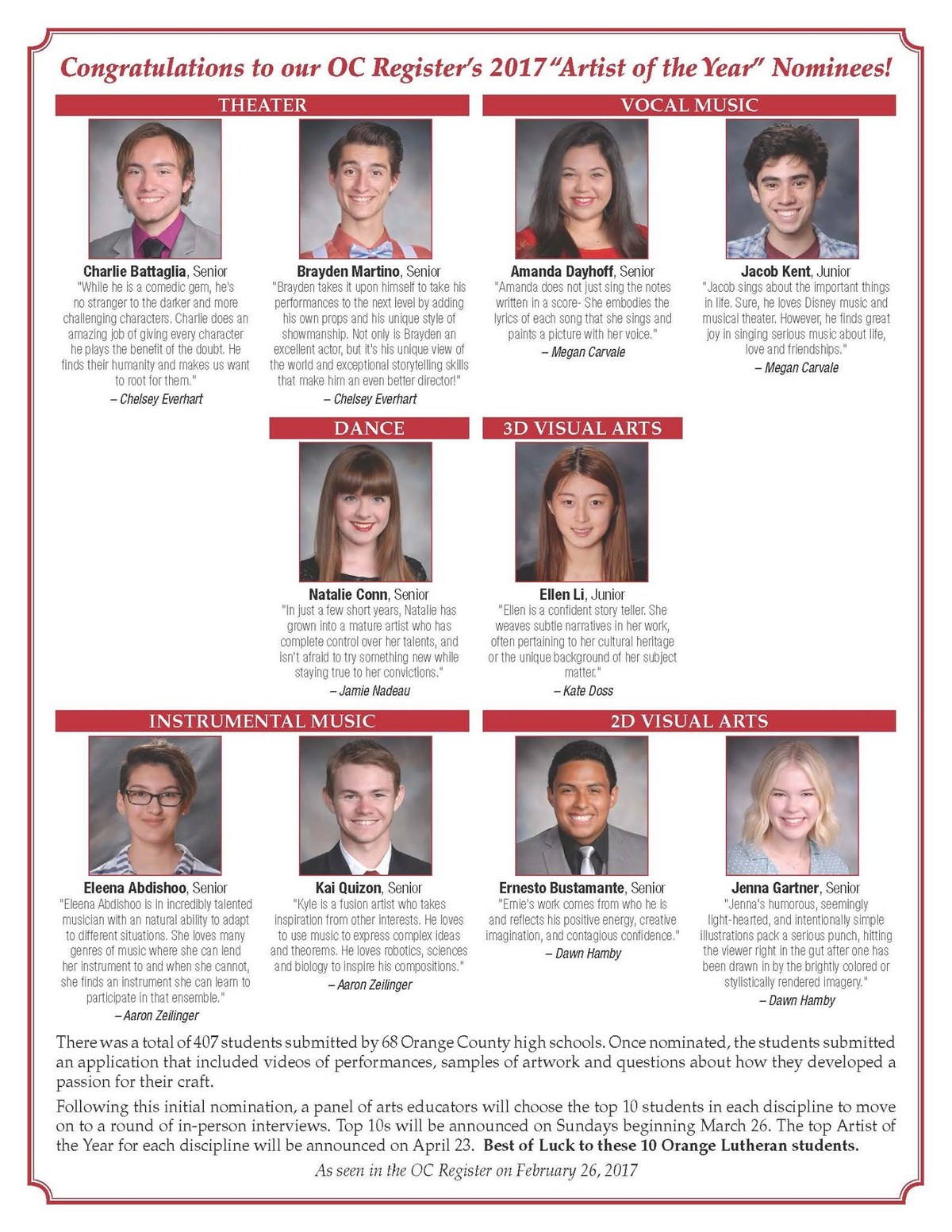 3/1/17
St. Paul's alumni Jacob Lord, a senior basketball player at Servite, and Kara Fortier, a senior lacrosse player at Esperanza, were both recognized as Athletes of Character & Honor at the Orange County Athletics Director Association Banquet. Fifty Orange County high schools were present, each having the opportunity to select one male & one female to receive this award at the banquet held tonight. Jacob plans to play basketball for Concordia Wisconsin next year. 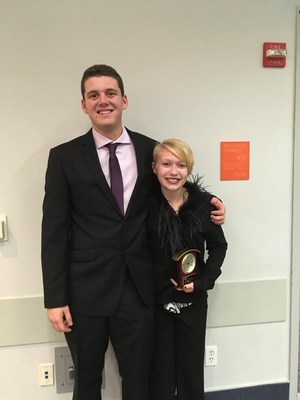 5/19/16:
Amelia Van Orman (      ) and the Orange Lutheran girls softball team is having a banner season. The Lancers are currently 26-3, went 8-0 in the very competitive Trinity League, and won three tournaments this year. They are ranked #1 in Orange County, #1 in the State (according to Calhisports), and #2 in the nation (according to Max Preps)!
6/3/2015:
Liz Maxwell (2007) Placed on Scholar Athlete List at Concordia, Nebraska
and named as Honors Student at Concordia Nebraska.
Mr. Maxwell (Assistant Principal/ Athletic Director) and Mrs. Maxwell (4th Grade Teacher) are very proud parents!
5/20/14
Congratulations to Claire Masterson (2010) who was named AP Statistics Student of the Year 2014 and Outstanding French Student of the Year 2014 last night at Orange Lutheran Celebrates Student Success Award’s Night. She will be attending Westmont College (Santa Barbara) in the fall and was a recipient of their President’s Scholarship. Claire will be majoring in Biological Sciences on Westmont's Pre-Med Track. She plans to minor in Dance. Panther Pride!
6/20/13
The Century League announced their All-League Baseball players.  First Team All-League was Nate Green '09 (Canyon High School) and 2nd Team All-League was Harrison Pyatt '10 (Esperanza High School).  Congratulations to Nate and Harrison!

Paul Lavigne '89 was named the Orange County Special Education Administrator of the year for 2013 by the Association of California School Administrators. Paul is the Director of Student Services/School Psychologist in the Savannah School District, Anaheim.

Matt Hammonds '09 and Kyle Steckler '09 were recognized in the Orange City News on June 6th, 2013. They were recognized for their 4 years of service with the National League of Young Men. This is a nonprofit organization for mothers and sons, and promotes the development of young men into community leaders.

2/12/13
Congratulations to JoJo Ballesteros '09! JoJo is the regular-season county leader in 3-point shots made with 89.  He is a senior and plays basketball at Canyon High School. JoJo's varsity career total of 309 puts him at third most in county history.

1/14/13
Matt Wingert '05, a senior at Concordia University, Nebraska took part in a National Parks Study Tour this past summer.The geography students from Concordia completed a tour of Death Valley, Sequoia, Kings Canyon and Yosemite National Parks. They had to complete a digital journal of photos, writings and observations.  In Death Valley they hiked the sand dunes and visited the Racetrack Playa. The trip also included some backcountry jeep trips and hiking and camping in Yosemite.

Monica (Schulte) '97 Morris and her husband Joseph had a baby girl, Emma Marie, on July 30, 2011. The family resides in Columbus, Ohio.

Travis Pinick '01 married Sara George on October 6, 2012. Alumni in the wedding included Jason Heim '03 as the Best Man and Sam George '04 one of the Groomsman.  Kelcie Pinick '03 and Siara Pinick '08 were bridesmaids for Sara.

11/28/12
Colin Massey '09 was crowned Homecoming King at Lutheran High School of Orange County in October.  At Canyon High School, Jo Jo Ballesteros was a member of the 2012 Homecoming Court.

Congratulations to Steve Hight '74, he was named the Pacific Southwest District 2012 Elementary Educator of the Year at the Lutheran Educators Conference held November 18-20, 2012 in Nevada. Steve's first call was to First Lutheran, Long Beach where he taught 5th and 6th grade. His next 29 years have been spent at St. Paul's.  He teaches 7th and 8th grade math, coaches basketball, and is the Department Chair for the Middle School. Congratulations again on this honor!

FOR IMMEDIATE RELEASE  September 4, 2012
Area Student Selected to Perform with the Bands of America Honor Band in the 2013 Rose Parade®
Paige Rooney, a Sophomore at Troy High School in Fullerton, has been selected by Music for All to be a member of the Bands of America (BOA) Honor Band in the 2013 Tournament of Roses® Parade. Paige was selected from among hundreds of applicants across the nation for membership in this prestigious national honor band. Paige is the daughter of Kirk & Catharine Rooney, of Fullerton. Her Marching Band instructor is Jason Lomeda. The Band Director is Joseph Castillo. Paige discovered her love of band while attending St. Paul's Lutheran School in Orange, where she participated in band from third through eighth grade. She also participated in the Orange County Lutheran Youth Band for six years, marching in the Huntington Beach 4th of July Parade each year.

Lindsay Elliot '08 (Lutheran High) was one of 6 women to receive scholarships from Central Orange County Alumnae Panhellenic. She will receive a $1000.00 scholarship. Awards are based on outstanding scholarship, leadership, and service. Lindsay will be attending Cal Poly San Luis Obispo this fall. Congratulations Lindsay!!

3/21/12
St. Paul's has several alumni who are participating this month in the Lutheran High Musical- Oklahoma! Hayden Bragg '08 plays Ike Skidmore, Nate Meier '08 as Tom, Claire Masterson '10 is the Principal Dancer, Lindsey Elliott '08 is in the Dance Ensemble, Claire Chiaromonte '09 and Dylan Dohi '10 are in the Ensemble. Josh Voelker '98 is behind the scenes as the Technical Director and Technical Supervisor.

Congratulations to JoJo Ballestero! He was named to the Century All League 1st Team in Basketball.  He plays for Canyon High School.

Last month at Villa Park High School, 8 former basketball players were honored for their accomplishments on and off the court.  St. Paul's Alumni were: Brice Prather '98 - held a 3 year record of 76-16 and 29-1 in the Century League - graduated from Azusa Pacific University; Matt Poutsma '93 - 2nd Team All-CIF senior year - graduate of Chapman University; and Marcus Gibson '01.

3/4/12
Alison Riach '93 Spors was recognized at St. Paul's church service on March 4, 2012 for her 10 years in Lutheran Education.  Ally teaches Kindergarten and is the Admissions Counselor at St. Paul's. Another alumnus teaching at St. Paul's school is Steve Hight '74. Alumni involved in the School Age Care program are Jared Williams '04, Brittney Dickel '07, and Matthew Gest '07. At St. Paul's Early Child Development Center you will find Julie Miller '86 in the Red Room. Thank you to all of these alumni for their hard work and dedication.

At Lutheran High School of Orange County in January, Bryn Gornick '08 was recognized as Student of the Month in the Online Program.

Good luck to all of these athletes!

2/9/12
Congratulations to Andrew Steinbergs '08, he has been selected as a finalist in the 2012 National Merit Scholarship Program.  He is currently a senior at Lutheran High School of Orange County.

2/3/12
Alyssa Schlom '08 signed with University of California Santa Barbara to participate in Track and Field next year.  Good luck, Alyssa!

1/24/12
We have 5 alumni who have received Student of the Month recognition at Lutheran High this past Fall.
September 2011 - Lehi Smithson '09 - English, and Hayley Gerken '08 - Theology
October 2011 - James Francuz '08 - Math
December 2011 - Christopher Rieber '11 - English, and Katie Whaley '08 - Social Studies
Congratulations to these students  on their recognition for their hard work!

Congratulations to the 51 alumni who achieved High Honor Roll status at Lutheran High.  To achieve High Honors you must have a 4.0 or higher grade point average. Great job, students!

9/28/11
Conner Sullivan '08 will be attending Duke University next year to play baseball.

8/10/11
Congratulations to Jason Hight '06, he made the Dean's List 2nd Semester at Linfield College in McMinnville, OR.  He was also named to the 2010-2011 Academic All-Northwest Conference List. To be on this list, you must have a GPA of 3.5 & above and participate throughout the entire Varsity Season.  Jason is a member of the Cross Country and Track teams at Linfield College.

Conner Sullivan '08 was named to the All-Trinity League 1st Team in  baseball this past spring and Nolan Rogers '07 was Honorable Mention. They both played baseball for Lutheran High School of Orange County.  Conner also received the MVP award from his team.

5/17/11
Congratulations to Steve Hight '74 and Philip Matheson '87.  They were inducted into the Lutheran High School of Orange County Athletic Hall of Fame on April 9, 2011.
Steve was a 4 year Varsity basketball player who was All-Arrowhead League and All-CIF.  He is still in the top ten in Lutheran High's record book for scoring, rebounding, assists, and steals.  Steve was also on the Varsity golf team in 1976 & 1977.
Steve has been a teacher and coach at St. Paul's since 1984.  He and his wife, Karen, have 2 sons.  Jason '06 is a freshman at Linfield College in McMinnville, OR and Travis '09 is a sophomore at Lutheran High.
Philip Matheson played football and baseball and one season of basketball at Lutheran High.  He was awarded All-League and All-CIF honors in football and baseball.
Philip is currently a financial advisor in Costa Mesa.  He and his wife, Renee, have three children and reside in San Clemente.

56 St. Paul's alumni received High Honor Roll status the first semester at Lutheran High School of Orange County. To be on the High Honor Roll you must achieve a 4.0 or higher grade point average.

3/6/11
Julie Miller '86 was recognized at St. Paul's church service this morning in recognition of her 20 years of service in Lutheran Education.  Julie teaches in the Red Room at St. Paul's Early Childhood Development Center.

Coming up this month Lutheran High School of O.C. will be presenting Joseph and the Amazing Technicolor Dreamcoat.  Hayden Bragg '08 will be playing Potiphar.  Lindsey Elliott '08 is one of Mrs. Potiphar's attendants and is also a featured dancer. Claire Masterson '10 is a featured pointe dancer. Brandon Garcia '08 is one of Potiphar's Assistants and is also an Ishmaelite.

11/9/09
Orange Lutheran students Jason Hight '06 and Kevin Huang '07 were 2 of the students honored at a recent chapel for having attained a 5 on an Advanced Placement test.  5 is the highest score that a person can receive on an Advanced Placement test.
Nayer Toma '06 and Kristin Stuetzel '06 were Orange Lutheran's Homecoming King and Queen this year.  Hannah Ouellette '06 was a member of the Homecoming Court.
Congratulations to these students for this great honor!
Travis Pinick '01 was recently drafted to play basketball for the LA Defenders.
St. Paul's has many alumni participating in Orange Lutheran's High School Musical.  Directing the musical is Danielle (Kincebach '97) Frazier.  Also helping behind the scenes are Dani Mier '05 - Production Assistant, Joshua Voelker '98 - Assistant Technical Director, and Daniel Brooks '07 - Backstage Crew.  Cast members include Kendall Bowen '08, Caitlyn Bergman '06, Lindsey Elliott '08, Nate Meier '08, Nikole Cornejo '06, Samantha Beem '07, and Victoria Pettit '08.  Come enjoy the musical and see the talents of our alumni!!
10/21/09
Sean McEvilly '06 has committed to play football at Northwestern.  He picked them because of its combination of athletics and academics.  He was recruited to play on the defensive line.